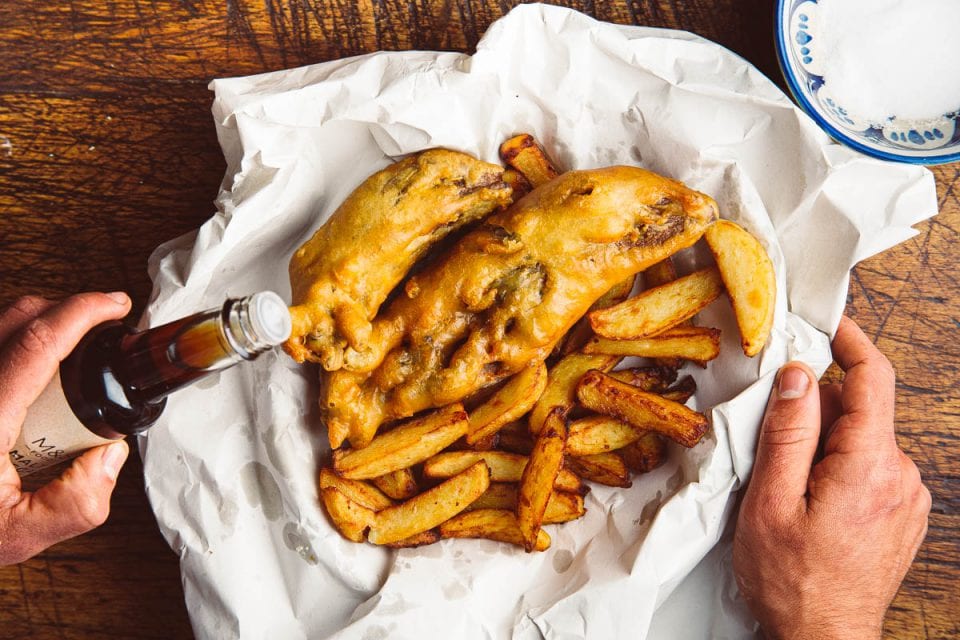 The Crispiest Vegan Fish And Chips 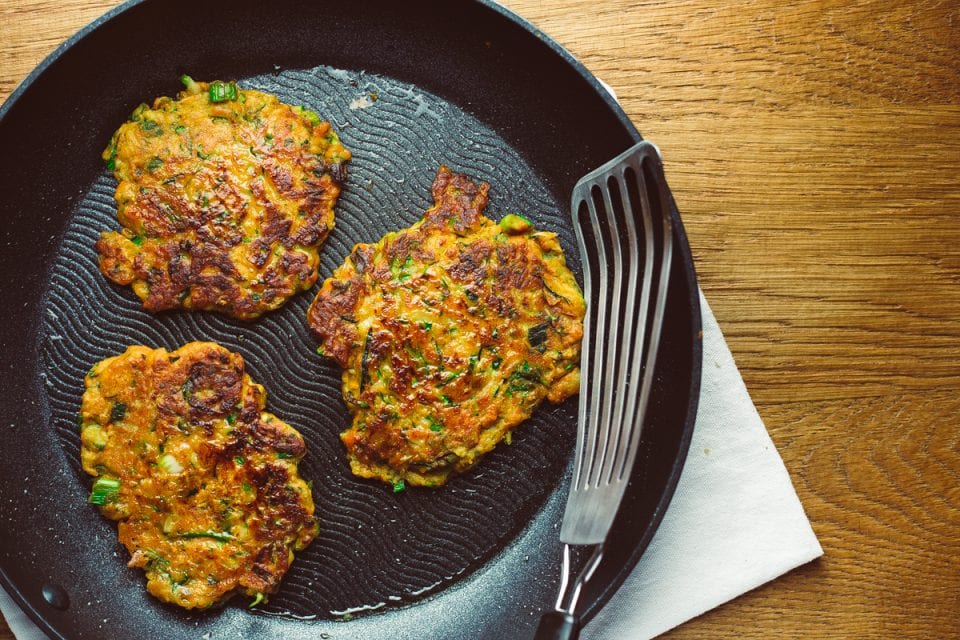 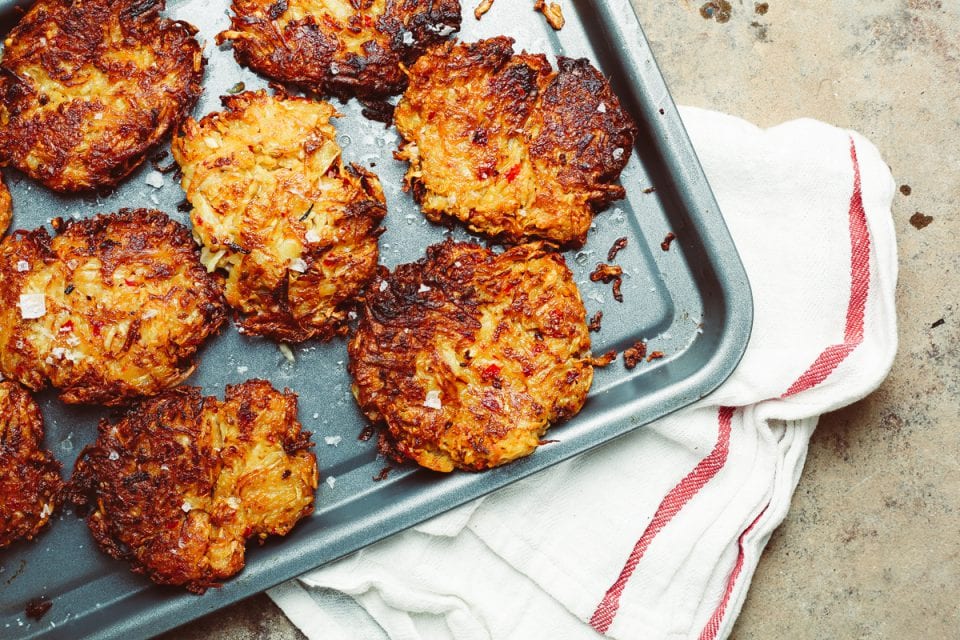 These crunchy spinach fritters are wonderfully versatile and delicious. I love a vegetable fritter, and spinach fritters are no exception. These beautifully crispy and salty veggie fritters are so tasty. They work as a side to a meze feast or as the star of the show as a main in their own right. The irony and fresh spinach is the perfect counterbalance to the sweet and hot chilli oil. these are not to be missed!

Spinach is one of those marmite vegetables – some people love it some people hate it. I’m on the love it side, but this recipe for crispy spinach fritters will convince even the most ardent of spinach detractor that this leafy green rocks.

This recipe works with both baby and mature spinach. Baby spinach is normally widely abundant in supermarkets, but mature spinach is often cheaper and less often packaged in tons of plastic. You’re more likely to have spinach on the mature end of the spectrum if you’re growing it at home. Spinach seems to have a mind of it’s own in the vegetable patch and can quickly go from small seedling to a bolting nightmare.

Unlike other vegetable fritters these spinach fritters have tons of body and flavour. They’re not just a crispy vessel for oil, they’re packed full of spinachy goodness and nutrients. So you can enjoy these delicious salty treats whilst feeling somewhat less guilty than normal!

How to make spinach fritters

Making these crispy vegetable fritters is incredibly easy, but there’s a few key things to follow whilst you cook up these crunchy bad boys.

Cooked spinach has a tendency to hold onto buckets of water. In order to get as much out as possible. Drain the spinach into a colander and then leave to rest until cool enough to handle or rapidly cool by running cold water over the cooked greens. Then once cool enough squeeze the spinach in between your hands to ensure as much water as possible comes out. You’ll probably want to take small clumps of spinach at a time to ensure proper squeezing technique!

The freshest, most delicious of chilli oils

Yes you can buy chilli oil in the supermarket. If you are feeling super lazy with this recipe – feel free to substitute the fresh chilli oil for store bought. However, fresh, spicy and delicious chilli oil is so easy to make and will pay dividends with the recipe.

I’ve included the measurements for enough chilli oil for the 4 servings of spinach fritters, however I normally make much more. I like to make a large batch of chilli and garlic oil then keep it in a jar in the fridge for days when I’m feeling super lazy. Adding this miracle sauce to anything from tofu scramble to fresh salads will 10x your enjoyment.

Making the chilli oil couldn’t be simpler – just whizz together 2 red chillies, 2 cloves garlic, 1 teaspoon of chilli flakes and 75ml of olive oil in a blender. Season with a little salt and some cracked black pepper and you’re away.

This recipe is just for plain spinach fritters but you can add a few different things to the base recipe and you’ll get loads more fritter combos for free. That’s my kind of recipe! Here’s a few suggestions and changes you can do to make other wickedly delicious vegetable fritters:

How to make healthy fritters

Making healthy fritters is a matter of reducing the oil used to cook them. You can invest in an air frier if you have the funds to invest. Air friers cook foods with just hot air so there is zero added fats to the fritters.

If you don’t have an air frier – baking the fritters is another healthier option. You’ll still need to use some oil to make the fritters crispy, but it’ll be a significant reduction from shallow frying or deep frying. See the baking question below for the method.

What is gram flour?

Gram flour or besan refers to a flour made from ground gram chickpeas. It’s commonly used in many Indian or Pakistani dishes. Gram flour has a higher level of protein than traditional wheat flour. This makes it perfect for things such as fritters as it gives the fritters more texture and bite.

Can I use plain flour for this recipe?

You most certainly can. Substitute the same quantity of gram flour for plain flour and follow the recipe as normal. The fritters will be slightly thinner and hold together less well until cooked. So don’t worry if the batter seems super gloopy and thin. Once fried they’ll be crispy and hold together nicely.

Can I bake these fritters?

Of course. The fritters won’t be as tasty and crispy but they’ll be considerably healthier. For baking just follow the recipe shaping the fritters by hand as normal. Then place onto a baking tray and cover with 2 tablespoons of vegetable oil and a sprinkling of salt. Bake in a 200˚c (fan-oven) oven for 20 minutes until crunchy and crispy on the exterior.

When are spinach fritters in season

Spinach is a very hardy and easy crop to grow. Thanks to this it is available year round. Over the winter months it can be grown in unheated greenhouses or polytunnels. In spring and summer it grows abundantly outside. Meaning you can enjoy spinach fritters for the entire year!

I’ve got a ton of recipes just like these fritters that I think you’ll love:

These crunch spinach fritters are wonderfully versatile and delicious. 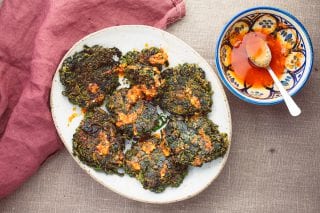 Eating this recipe will save around 2.59 KG CO2e per person.

That’s equivalent to the emissions produced driving 21.41 KM in a modern car.

The Crispiest Vegan Fish And Chips

Perfect recipe! I used regular flour as we just ran out of gram flour and the only addition I made to the batter is a few teaspoons of linseed for health points