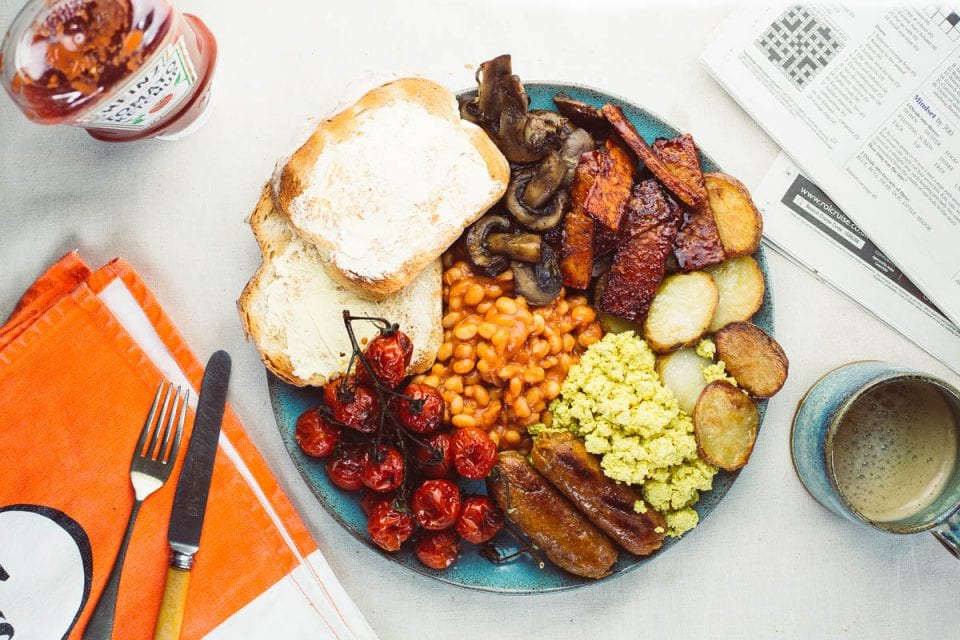 Chilli con veggie is my vegan version of the popular chilli con carne. Simple and comforting, this vegetable chilli con carne is an excellent addition for a mid-week meal. It’s an extremely versatile chilli that works with just about anything. Just my kind of dish!

Chilli Con Carne is a chilli dish with roots in both Northern Mexico and Southern Texas. The traditional chilli is, as the name suggests, made with ground meat. My veg chilli con carne uses a cunning mixture of mushrooms and walnuts to give a faux ground meat texture. This blend is so convincing that many of my non-vegan friends demand the recipe after they taste it at the dinner table.

Chilli con veggie is as versatile as it get’s. Traditionally the recipe is meant to be enjoyed with plain rice, but I have it with everything. It’s awesome on top of jacket potatoes, mixed in with crispy french fries, or rolled up in wraps. Honestly, this is so delicious you’ll find excuses to have it for breakfast, and I have on many occasion…

This recipe is a winner with kids as well. Fussy eaters begon, this chilli works like magic. I find that this recipe paired my sour cream, some soft tortilla wraps and fresh guac is the perfect way to entertain a varied crowd of diets. Vegan, vegetarian or omni – everyone will enjoy this tasty vegetable chilli con carne.

Making vegan chilli con carne is pretty darn simple, but here’s a few tips to take your chilli con veggie to the next level. Soon everyone will be banging on your door asking for that sweet recipe to that delicious vegetable chilli they enjoyed at your house.

So if it wasn’t mindboggling obvious before, chilli con carne is traditionally a meat chilli. Chilli con carne literally means “chilli with meat”. My chilli con veggie is a meat-free recipe, but that doesn’t mean it sacrifices any of the flavour or texture.

In traditional chilli con carne ground mince is used to bulk the chilli. For our veg chilli con carne we could just throw in a bunch of vegetables to replace the meat. Whilst I do love a good vegetable chilli, this doesn’t really replicate the “mince” texture. I’m also adverse to putting any vegan/vegetarian meat substitutes in the recipe. I love these when I’m short on time, but let’s be honest they’re no match for whole foods.

My whole food saviour – blended walnuts and mushrooms. I use a food processor to blitz walnuts into a breadcrumb like consistency. Then I shred the mushrooms until they’re stringy and almost “pulled”. Combine these two together in a mixing bowl and you get something with an eerie resemblance to mince. But this mince is cruelty free and packed full of vegetable goodness!

The key, however, to the chilli con veggie mince meat is to not over-process it. Be careful to pulse the food processor until the walnuts and mushrooms are shredded. You don’t want to go into a paste – you’ll loose all texture and your vegan chilli will be mush!

You’ve heard the phrase – beans, beans the more you eat the more you… Well in my book you should always eat more beans. Not only are beans packed full of nutrients and plant protein, but they’re incredibly inexpensive. Throwing beans in any vegetable chilli will help you bulk up the chilli easily and help the recipe last longer.

In this recipe I use red kidney beans as my beany addition to the chilli con veggie. This is in keeping with the traditional chilli con carne recipe. Nevertheless you can toss in any beans or pulses you fancy. The chilli con veggie sauce will flavour them making them delightfully salty and moreish.

I recommend always cooking your legumes and pulses from scratch. In the recipe steps, I’ve opted to just use can weights as soaking and cooking can be a bit more time intensive. I think it’s well worth it though. So next time you’re making this or any other vegetable bean chilli recipe, why not soak and cook your beans first. The method doesn’t really vary that much between beans, I generally follow this approach:

This chilli con veggie recipe owes much of its flavour to soy sauce, the umami wonder drug. In this dish soy sauce acts as a seasoning but also a way to help make the walnuts and mushrooms have an extra “meaty” flavour. By frying the mushroom and walnut mix in the soy sauce it will help colour the mushrooms and give wonderful burnt flavourings which will meld with the base of the vegan chilli con carne.

Next time you’re cooking anything savoury and you’re looking to make give it a bit more oomph. Reach for the soy sauce instead of the salt. Soy sauce isn’t just for asian cooking – I use it in basically everything, from soups to breakfast tofu eggs. It is perhaps my most used ingredient in the kitchen. Three cheers to soy sauce!

The great thing about this vegetable bean chilli recipe is how amazingly versatile it is. Just a few tweaks and changes and you’ve got yourself a completely different dish. I always urge anyone reading the recipes on my site to experiment a little with the recipes and see what works for you. It’s fun and rewarding. Here’s some ideas to get you started:

Can I freeze this chilli con veggie?

Yes, this vegan chilli con carne is excellent for batch cooking. I normally triple the quantities and then freeze into individual portions to re-heat when I’m feeling particularly lazy or overworked. It tastes just as good re-heated from frozen!

I want a nut free vegetable chilli con carne? What can I use instead of walnuts?

You can use extra firm tofu that has been broken into chunks using a fork.

What to serve with vegan chilli con carne?

Chilli con veggie goes with just about anything, however I normally like to serve this chilli with a solid helping of carbs and some greens. For the carbs I normally opt for basmatti rice, baked potatoes or crispy nachos. Then I’ll get whatever leafy greens I have available (kale, cabbage, spinach) and wilt. Then I mix with 1/2 tablespoon of lemon juice, 1/2 teaspoon of cumin, a tablespoon of olive oil and some salt. With the greens, carbs and chilli you have yourself a well rounded and pretty healthy meal!

If you like this chilli con veggie you’ll love…

If you enjoyed this recipe you’ll love some of these recipes:

This vegan version of the popular chilli con carne is magic. Simple and comforting, this chilli is an excellent addition for a mid-week meal. It's an extremely versatile chilli that works with just about anything. That's my kind of dish! 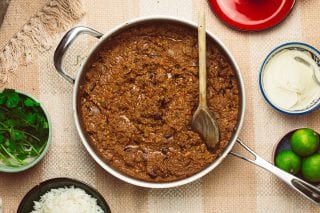 This meal is around 91% less polluting than the average UK meal.

Eating this recipe will save around 2.68 KG CO2e per person.

That’s equivalent to the emissions produced driving 22.15 KM in a modern car.

As soon as Autumn arrives and the cold nights draw in I get out my chilli pot and make the ‘best’ meat chilli around! I’ve been on a quest to find a vegan alternative that can compare and failed miserably, until now. THIS IS IT!!!

Awesome Steven, glad you enjoyed it

Would you consider publishing the nutritional info for your recipes? Just helpful to know how much of my daily Fibre etc. that the recipe is covering.

Hey Fergus, I’m glad you enjoyed the recipe. Yes I have considered publishing the nutrition (I have all the information) but just haven’t found time to implement the design yet. I’ll let you know when I do it!